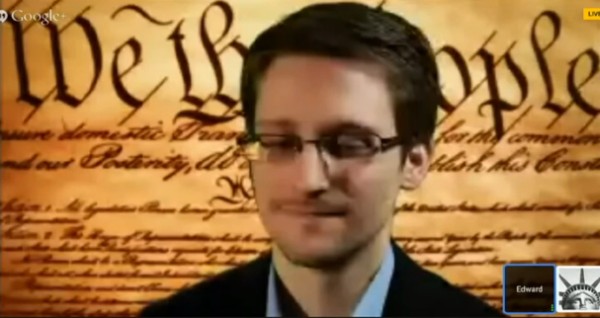 • The Snowden revelations have changed our thinking. •
Since Snowden computer security professionals and IT people are rethinking our online safety.
(Image from the video below).

Ask yourself some questions.

We reveal ourselves online in many ways. We publish; use websites; watch video and send email. We do so many other things. All can be detected online. All can be used to create a picture about us. In a commercial society much of the data that is collected about our activities is by people who want to sell us things. These people and companies have legislative controls to prevent them breaching our privacy. The Snowden revelations show that we need to think beyond just commercial or customer data.

In a democracy we need to trust our Government. We expect them to treat us as free citizens who have contracted with society to behave and contribute according to the law. When we misbehave under that contract the law is applied. Government, through agencies like the police, enforce the law. The government also updates the law when needed.

Governments have enacted legal provision for access to communications, computers and the data they hold. This is perfectly proper if there is good reason for access to these systems. If court control is in place Government agencies can legally control criminal or terrorist activity. The courts provide oversight. They apply tests for reasonable action in the public interest. The Snowden revelations indicate that wide surveillance of the population is happening without these controls.

(NSA) actively monitors significant numbers of the American population. They are also monitoring people and organisations across the world. This monitoring is not exclusive to the NSA. Similar monitoring goes on by other Governments. In the UK that is undertaken by the Government Communications Headquarters

The NSA and others operate under a blanket of secrecy. They do this in the interests of national security. However, the Snowden revelations reveal there is blanket monitoring of very large numbers of apparently innocent people. The electronic monitoring uses straight forward data collection and more covert activity. This includes security vulnerabilities, weaknesses and exploits. The latter could be considered illegal actions when undertaken with criminal intent. Telephone, email, website visits and financial and transaction data are monitored. The Snowden revelations have raised serous concerns. It seems now that the NSA collection of vast amounts of data about the population has become an uncontrolled norm.

The consequences of this breach of trust

The fact that Governments have overstepped the mark in this way has not gone unnoticed. The public have expressed concern about this blanket surveillance. We may trust the current Government (or not). There are real concerns for our privacy now. But, there is concern for the future too. Massive repositories of data about the population at large allows for long term data storage. Taken out of context and mixed over time our data is vulnerable. It is open to abuse, misinterpretation and mistakes. Such things can come back to affect our lives in many years time. We should be concerned about what happens when a less trustworthy government is in place in the future. Information can be used to control our lives, destroy our prospects or manipulate us. Governments can acquire the power to manipulate the population. Or, corrupt individuals in positions of power can abuse their privileged position. Then they may use information to unfair advantage.

The Snowden revelations show Governments have breached our civil liberties and created a fundamental breach of trust. Many people are now suspicious of what is still going on – what is still hidden. The question that raises is, “How can we protect ourselves from Government intrusion”? Our privacy relies on our security. The Snowden revelations have shown that government agencies have abused our security and this directly undermines our privacy.

Information technology people, and security professionals, have become extremely concerned by this covert activity. There are solutions. Open surveillance can be reduced or stopped with widespread and effective encryption. This would need to be applied to most aspects of our electronic communication. Encryption of hard drives, encryption of every form of connection between web sites and servers would be a start. Routine encryption of our email and other communications would help secure the movement of data as well.

Companies have been quick to respond to privacy legislation. Much of that response is about securing company systems. Protecting privacy is about the security of passwords and tight control of access to information. It includes strong firewalls and secure coding. But, it is also about encryption on the connections between the customer and the company site. These suffer from a basic flaw. If the customers’ own system is insecure or unprotected there is a single point of weakness. This allows other weaknesses to be exploited down the communication chain. Encryption on a more widespread scale is needed at all levels of computing and communications.

Unfortunately the encryption systems needed at the user end are not well developed. They also often require expert implementation. Members of the public are not easily able to do these things on their home or mobile computers. So the benefit of secure communication is in some cases beyond public use. Many security professionals recognise that they have failed in one aim of computer security – to make secure systems widely usable. This not only worries the public but companies as well.

The real impact of the Snowden revelations

Companies have begun to tighten up their security and customer communications. This includes issues surrounding how they secure data on behalf of customers. However, there has been little done to improve the basic operating level of security on home computers and mobile devices. There is a lot to do to improve security overall across widespread information systems and the Internet. Recent security flaws like “Heartbleed” have also weakened our faith in secure systems.

However, the broad impacts for our security have gone beyond just computer systems and security. The Snowden revelations have had an impact on the ways that people do business and think about their data. Some of these impacts are…

The Snowden revelations should make you think

The United States in particular, is in a unique position. Much of the worlds online business is conducted through some aspect of Internet use involving US companies or hardware based there. This is true of businesses, other organisations and individuals. So we should all consider our position with respect to what we do online. Most of our activity opens us up to abuse by the NSA. However, we should remember that other organisations in the USA have similar abilities. This is true in other countries too.

For ordinary members of the public there are other consequences. We should be thinking of more secure systems at home and on mobile devices. Our purchases should be at least be made with some security awareness. We should also be careful what personal data we release to cloud services, social networks and USA based businesses. After the Snowden revelations we now know these to be fundamentally compromised in terms of security and government handling of data.

Deeper insights from Snowden himself

In this video some of these issues of security and privacy are made clear. Snowden himself reveals some of the thinking behind his actions. He released to the press critical documents. These show the NSA are going beyond the national and public interest in the way they access and use personal and company data.